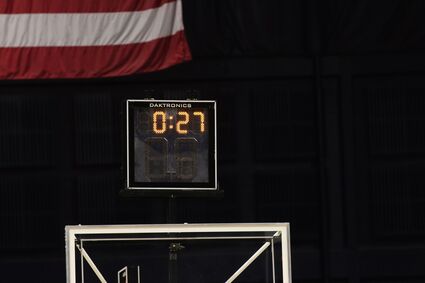 Look up! Next year, high school basketball hoops around the state of Montana will feature shot clocks. Photo by Pierre Bibbs.

Though the board touched on many topics during their April Board Meeting, a few items will likely impact Phillips County athletic events, the largest of which is reclassifications by other schools. The board also approved shot clock rules for basketball and State competition sites for the 2023-24 athletic year.

The last instance where a Phillips County team faced the Fairview Warriors was last month when the North Country Mavericks lost to Fairview in the first round of the Eastern C Divisional.

In 2023-24, Fairview is tentatively set to be a part of District 2B, the district that Malta belongs to in volleyball, basketball, and track and field.

Chinook High School is also reclassifying from Class C to Class B and is tentatively assigned to compete in District 1B for volleyball, basketball, and track and field. If passed in November, the Sugarbetters will be a part of the Northern B Division. Chinook will also continue to compete in the Eastern Division.

All new district placings will be fully determined in the November Executive Board Meeting.

The board also approved shot clock rules and clarifications for high school basketball. The 2022-23 season will be the first season that Montana High School Basketball will require all participating schools to incorporate a 35-second Shot Clock.

The board also approved sites for a majority of State meets and tournaments from the Fall of 2023 to the Spring of 2024 (not to be confused will the 2022-23 season happening this upcoming school year).

Dates for the upcoming season (2022-23) were also filled in during the board meeting.