Warren was born June 22, 1939 to John Albert and Ivernia H. (Cookingham) Abrahamson. He was the second to the youngest born out of 7 children.

He attended school through the 8th grade in Bowdoin. In Malta he attended 9th and 10th grades before joining the National Guard in 1960. He finished his training in 1961. When he got out of the Guard he went to work for his sister and brother-in-law Lillian and Kenny Temple.

Warren met the love of his life Lydia G Moore, while attending school in Malta as he was friends with her 2 older brothers. They were later married March 1, 1963. To this union Warren O. J. and Deborah J.O., were born.

Warren and Lydia lived in Malta when their first child, Warren O.J. was born. They then moved to Shelby MT. where Warren worked at the Dodge Garage. From there, they moved to Hogeland and Warren worked for Bella Drinkson as a farm/ranch hand. It was while working in Hogeland that they added another child, Deborah J.O. to the family. Warren then moved his family back to Malta and went to work for the Chevy Garage and later for the City of Malta. The family then moved to Hinsdale and he worked in the carpentry trade. He had a hand in building many of the homes in Hinsdale. He also helped build the foundation for the substation at Fort Peck. While living in Hinsdale he also worked for W.C. James driving fuel truck and operating a cat. He then moved his family to Dodson. He continued doing odds and ends jobs with his carpentry skills and also worked for Jack Korsbeck on his farm as a hand. In 1981 Warren moved his family back to Malta. He worked for Ray Coleman at the Standard station for a short time. He then opened his own business known as Abe's Auto Repair, later retiring. Many times, Warren would do work on a vehicle and not receive payment, often saying "they have a family to support", or "they are having a difficult time right now".

While working at Abe's Auto, Warren and Lydia also ran a paper route, delivering the Great Falls Tribune to many Malta residents for many years. During this time Warren also became a grandpa. Being a grandpa was one of his biggest joys. He loved teaching his grandkids everything he knew and learned throughout life. He helped take care of his mother and his mother-in-law when he could. Many people knew Warren as a kind, quiet and gentle man. He was always willing to help anyone in need. Often while out in public, many young children would approach him, thinking he was Santa Clause because of his long, white beard. This brought big smiles to his face, as he truly loved kids.

He is preceded in death by his wife Lydia, his parents, brothers Wally, Willard, Wendell, and sister Lilian Temple, infant daughter Lissa and baby boy Abrahamson, and son-in-law Gene Copeland. 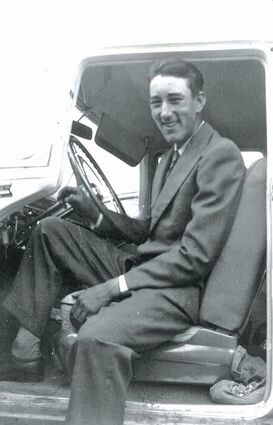 A graveside service will be held on Friday, April 29, at 2:00 p.m. at Malta Cemetery. Funeral arrangements are entrusted to Wilderness Funeral Homes of Malta.