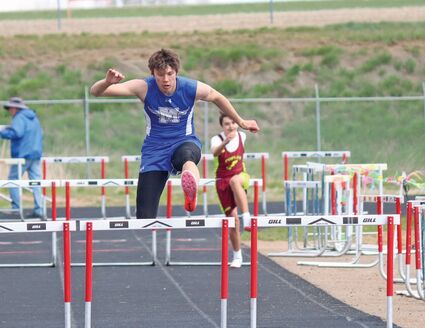 Malta's Connor Tuss run the 300 hurdles in Glasgow at the District 2B meet last Saturday. Photo by Pierre Bibbs.

The Malta Mustang and M-ette Track and Field teams both placed second in their respective District 2B meets last Saturday, May 14, in Glasgow.

The Glasgow Lady Scotties won the women's varsity meet with a total of 202 points, Malta was second with 169 points, Harlem was third with 63 points, Poplar was fourth with 49, and Wolf Point was fifth with 31.

The Northern B Divisional is scheduled to take place at Memo...