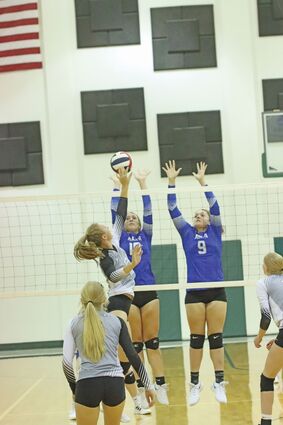 Maverick Mattea McColly goes up for an attack against Malta's Giona Lamb and Denvyr Tuss last Tuesday in Whitewater. The Mavericks won 3-2. Photo by Pierre Bibbs.

The Malta Volleyball Team and North Country Maverick Volleyball Team clashed in a Tuesday, September 13, meeting of undefeated teams in the Penguin Palace in Whitewater.

Teagan Erickson led the charge for North Country with 16 kills, 18 digs, and two blocks. Paige Wasson had 12 kills and 15 assists. Kora LaBrie and Kendall Scheffelmear each had 17 digs.

LaBrie, a Whitewater senior, was asked how it felt to get a win in her...