Malta Assembly of God Welcomes A Pair of Pastors 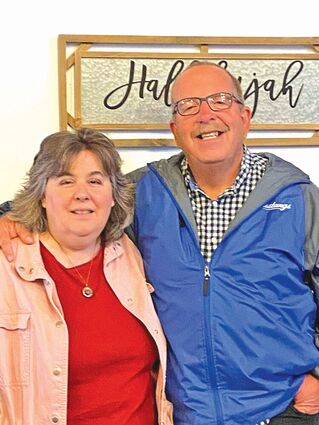 Like the animals Noah selected for his infamous ark, they came in as a pair to the Assembly of God Church in Malta, last April.

The "Welcome to Malta" by the friendly people, is one of the signs that both Pr. Mike Skaggs, and his wife, Debbie, thoroughly enjoyed. Coming to the quaint little town of ours, the Skaggs' have found the ideal town and can easily call this "home."

Pr. Mike has been to "The Streets of Bakersfield" in California, literally. He attended school across the street from the studio where "Hee Haw" was filmed. Buck Owens and Dwight Yoakam didn't win him over to country music, and Mike's love for the Lord brought him to work where the benefits aren't spectacular...but retirement is out of this world.

While attending college at Bethany Bible College in Scotts Valley, CA, Mike and Debbie met. Pr. Mike finished his education at Global University and Pr. Debbie went on to garnish her Masters at Multnomah University in OR., in Religious Studies in 2016. Pr. Mike was certified through the church in 1994, licensed in 2004, and ordained in 2011. He's coached sports, driven school bus, and clerked at a grocery store in the various towns they have lived in. While they are both pastors, Pr. Mike is the only one that fills the pastoral duties at this church.

What do they enjoy doing in their spare time? "Spare time...?" Pr. Mike chuckled, and then added he does enjoy golfing with congregational members and with fellow pastors and clergy. Pr. Debbie has recently started subbing at the Malta Schools. She enjoys quilting and said she does knit – when she wants to. Her quiet time will find her nose deep in a book; she spends her time translating the New Testament from Greek to English.

In their role as ministers, except for the Malta Assembly of God, Pr. Mike and Pr. Debbie are working with churches where there are issues. These issues include challenges within the church – sometimes financial, sometimes membership. They embrace the given tasks of rejuvenating a church and make efforts to overcome apathy and lack of prioritizing the home values.

They have been assigned to six churches in their mission history. Their assignments have placed them with the walls of churches in a town of 200 residents to 40,000. Pr. Mike said, "We are just really, really glad with the welcome we have received since arriving in Malta."

The Skaggs' family includes son, Darin, and his wife Mackenzie, who reside in Maple Valley, WA. Darin works for a Fred Meyer chain outlet. Their daughter, Kelsey, and her husband, Edwin, live in Gainesville, TX., and she works at a zoo. They have no grandchildren. (They say...yet.)

The Assembly of God Church is a nice blend of all ages that sit before Pr. Mike on Sunday morning; they are a growing and giving church, as evidenced by the recent events at the church. Generous love offerings were recently provided to recent programs and to missionary work. The church has a K-5th grade group (Navigators), and a 6th grade-12th grade for youth.

When they aren't busy with hobbies and pastoral work, you will probably meet up with them at football or basketball games. They would love to have you stop by or extend a "Malta" hello if you meet them on the street, field, or court.