M-ettes Smack Down 2B Foes 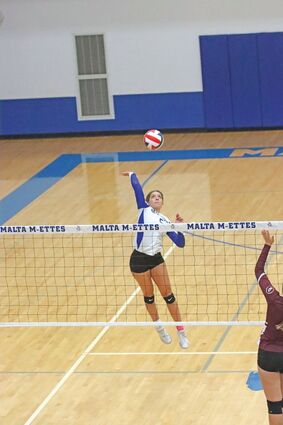 Malta senior Addy Anderson goes up for an attack in Malta's win over Poplar last Saturday in Malta. Photo by Pierre Bibbs.

The Malta M-ettes Volleyball Team defeated a pair of 2B foes last week, helping them secure a first place finish as the season nears it's end.

Malta Head Coach Mary Grace Kalal was asked how she felt her team was doing at this point.

"I am feeling pretty good honestly," Coach Kalal said. "The growth that we have had as a team from the beginning till now has been amazing to see."

She said that the team has become more consistent and have welcomed the challenge of playing different roles.

The M-ettes went to Harlem last Tuesday, October 11, and defeated the Wildcats 3-0, and then the M-ette h...