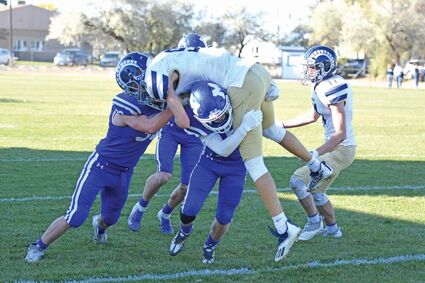 The Malta Mustangs led wire-to-wire in their playoff win over Red Lodge. The Mustangs are set to host the Jefferson (Boulder) Panthers on Saturday, November 5, at Mustang Field at 1 p.m.

The Panthers are currently on a three-game win streak and are 7-3 this season. Most recently, the Panthers defeated the Eureka Lions 21-6 on Saturday, October 29.

In the last two games of the regular season, Jefferson blew out Columbus 48-12 and Three Forks 44-6.

Despite giving up a pair of highlight reel plays, the Mustangs were in control in their 34-13 win over Red Lodge last Saturday.

"I caught it and saw a guy really going to the outside, so I went inside, and I guess I just punched it in," Honey said.

The catch and run was Honey's first varsity touchdown.

Oxarart would provide the next touchdown on the ground, with a four-yard quarterback keeper. Sophomore Blaine Downing ran in the two-point conversion. 22-0.

Late in the second quarter, Mustang sophomore Mason Simanton picked off a pass in the endzone, giving the Mustangs the ball with nine seconds left in the first half.

"Our guys played pretty good, and we had good coverage on that," Simanton said. "We were talking very well and our defense is just playing lights out."

After the interception, Malta tried to score before the half, but Oxarart's pass was picked off and returned for a touchdown, giving Red Lodge their first points of the game. The kick after try was good. Malta led at halftime 22-7.

Despite giving up some momentum, Malta did not let up defensively and avoided a comeback.

"We were more ready than last year," Honey said. "We didn't want to go out in the first round again." 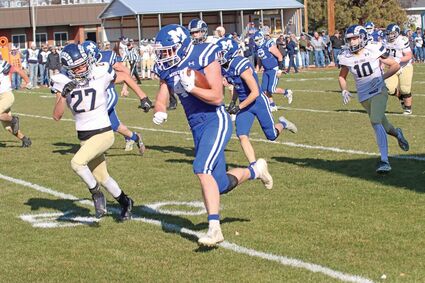 The next score wouldn't come until late in the third quarter after a nine yard throw from Oxarart to senior Kaden Bishop. The two-point try was no good.

Bishop was asked what the key to Malta's win was.

"Defense," Bishop said. "Our defense really played lights out, they always do and if we get our offense together and clean up some mistakes, we can be a dangerous team."

On Red Lodge's next drive, Red Lodge scored on a 75 yard touchdown pass. The kick after was no good. The score was 28-13 near the end of the third quarter.

Senior Spencer Gibbs scored on a two-yard run with 1:23 left in the game, giving Malta their final points of the game. The kick after was no good. Final score 34-13.