Motorists encouraged to be cautious along roadways 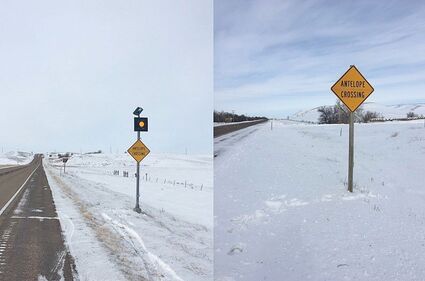 A couple of Antelope Crossing signs along Highway 2. Photo by Montana FWP.

Although the pronghorn (commonly known as antelope) hunting season is over, they are still on the move. The recent winter weather in Montana has triggered antelope into migration mode, with them often moving south. Frequently, this leads to large groups attempting to cross highways and other major roadways, and motorists should be aware.

As most folks know, antelope aren't the best at crossing fences or other barriers. Many times, this results in groups or individuals running next to a barrier or crossing back and forth looking for an easier path.

Barriers come in all shape and sizes and can be manmade or naturally occurring on the landscape. Some of the most common barriers include highways and other roads, railroads, fences, and even river corridors. Not all barriers impede movements at the same rate. For instance, some fences allow for pronghorn and other wildlife to cross through them much easier than others, while some are almost impermeable.

Along Highway 2 in northern Montana, areas have been identified that have frequent antelope migration movements. Several of these locations have yellow "antelope crossing" signs, including a few with a flashing yellow light. The intent of these signs are to alert motorists to potential antelope on the roadway, both for the safety of the motorist and the antelope.

Motorists should be especially cautious of these crossing areas but realize that antelope can cross virtually anywhere along roadways.

In addition, in some of these locations, FWP and other conservation groups have worked with some landowners to remove or replace fences to help wildlife move across the landscape.

How You Can Help

-Heed wildlife crossing signs, as these are placed in common crossing or congested areas

-If you see antelope (or any wildlife) on the road, SLOW DOWN.

-Landowners that do not currently have livestock in pastures, please leave gates open so antelope and other wildlife can pass easily.

-Plan for the future; If landowners have fences that are not needed, consider removing them. If woven wire fencing is no longer needed, consider replacing with four-strand fencing. There are many organizations, including FWP, that can help with this. Call your local FWP office for any questions.