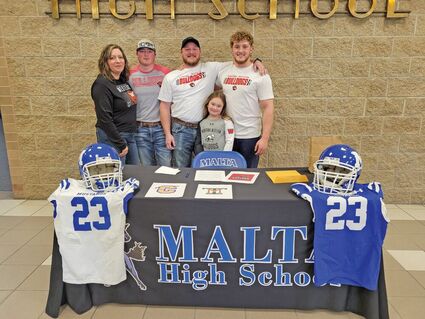 Joined by his family, Mustang football linebacker Cash Salsbery, a senior, signed his letter of intent to play football at the University of Montana Western in Dillon. Pictured from left to right are Janessa Salsbery, Cordel Salsbery, Ryan Salsbery, Ceilya Salsbery, and Cash Salsbery. Photos by Pierre Bibbs.

Last Thursday, June 2, word came out that former Malta M-ette and University of Montana guard Sophia Stiles had entered the transfer portal with one season of eligibility left in her college basketball career.

The PCN caught up with Stiles, the daughter of Del and KayDel Stiles of Malta, to talk about her last season with the Lady Griz, entering the college transfer portal, and what may come next for her.