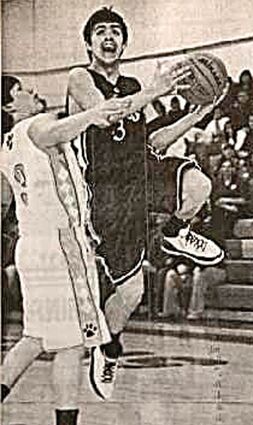 Jimmy Martin of the Dodson Coyotes eyes the basket on a layup attempt while defended by Frazer's Sheldon Brown during the District 3C Tournament in Scobey. Phot by Daniels County Leader.

Justin Funk’s been here before. The Saco School eighth grader won the Phillips County Spelling Bee Tuesday afternoon at Dodson School for the second time in his life. He also won the honor as a fifth grader and finished second last year as a seventh grader. The son of O.D. and Tanya Funk of Saco correctly spelled the word “propaganda” to win the title after 24 other participants in the county spelling bee had been eliminated. Second place went to Tyson Carney, a seventh-grade student at Malta Middle S...