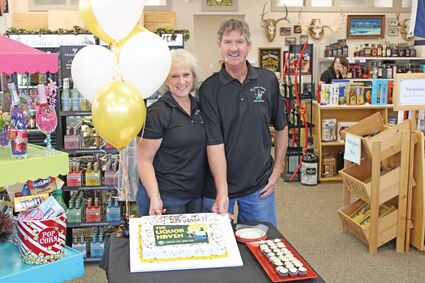 Gina and Scott Simanton have owned the Liquor Haven for the past 25 years. The couple celebrated their 25th Anniversary as owners. Photo by Mark Foss.

If you read the archives this week, you'll see the article that was in the paper 25 years ago on Scott and Gina Simanton purchasing the liquor store. In that article, Gina says that Scott told her he bought her a job.

When asked about that now, Gina says, "Boy did he! And he's still adding to it!"

As for the Liquor Haven, it is in its third building since they bought it.

"The building it was in when we bought it didn't exactly work for what we had planned. So we moved it on the day we bought it to the spot on 2nd Street," Gina said. "We were there for 21 years until we outgrew that place...