Jerome John Depute (Jerry to the Montana people) was born on November 3, 1935, to William J and Eva (Hennessy) Depute in Berthold, North Dakota, eight in a family of 12 children. He attended rural schools and Berthold High School. He was trained as a mechanic at School of Science at Wahpeton, North Dakota. In 1956, Jerry enlisted in the Air Force and served until December 1959. He was stationed in the United States, and in French Morocco, North Africa. Jerry moved to Lewistown in January 1960 and to Malta in April 1960, working for Malta Auto. In the fall of 1969, he opened his own mechanic shop. He also drove the school bus and the athletic activity bus for Malta High school for many years. He closed the mechanic shop in 1982. Jerry delivered the Billings Gazette from Malta to Havre for many years.

Jerry has travelled to the Holy Land, England, Belgium, Holland, Germany, Switzerland, Italy, and France. His last trip was to Medjugorje Bosnia with his sisters, Marcella, Delores, and Donna. His sister, Jane, continues to live in Israel.

Jerry met his wife, Lillian Kruger, when she moved to Malta with her husband and family in 1961. After her husband's death in February 1978, they were married on August 17, 1979. Jerry and Lil were both very active in the operation of St. Mary's School until her death in April 1996. Jerry was the maintenance man at the Church and the School from 1970 until he finally retired around 2012 but continued to be the person called when something needed to be done.

Jerry was very active in the Church and the community. He was a lay distributor of Communion, active in Cursillo, and the Knights of Columbus, serving as Grand Knight, Deputy Grand Knight, Treasurer, Secretary-Recorder, and leader for the First-Degree Team for Malta K of C council. He also served as Past Faithful Navigator and Past Faithful Controller of the Fourth Degree. He was named Knight of the Year on April 28, 2001.

Jerry has been an "adopted" grandfather and uncle to most of the students that attended St. Mary's School and many others within the church. Many have referred to him as the cornerstone of St. Mary's Parish. Jerry truly lived his faith.

Jerry also has a reputation as "a wicked cribbage and pinochle player". 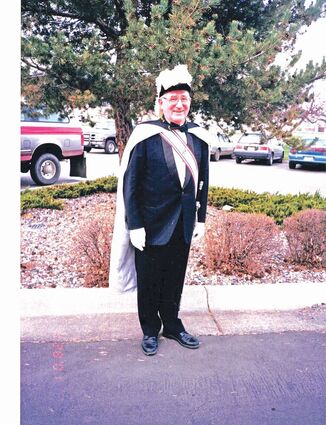