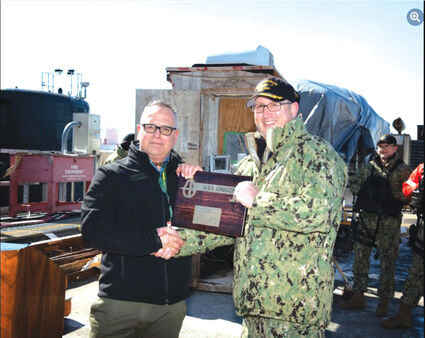 U.S. Navy Commander Lacy Lodmell (on right), a 1997 graduate from Malta High School, and Commander of the currently Pre Commissioned Unit (PCU) Oregon submarine will be officially commissioning the battleship on Saturday, May 28. Though he took command of the unit in 2020, the ship will finally have its long-awaited commissioning in Groton, CT, and will become the USS Oregon. Cmmr. Lodmell is the son of Terry Lodmell and Larry Lodmell of Malta. In this picture, Cmmr. Lodmell stands with LTG Daniel Karbler, Commanding General of the U.S. Army Space and Missile Defense Command.Courtesy Photo.