On June 7, 2022, Ruth Augusta Flansaas, 86, beloved wife, mother, grandmother, and friend went home to be with the Lord and the welcoming, loving arms of her husband John who preceded her on May 9, 2022.

Born August 4, 1935, to Marion and Iva union in Malta, MT, she graduated from Malta High School and soon married John Flansaas. They farmed and ranched west of Loring, raising 3 children there. Although raised a "town girl", she willingly and whole-heartedly adapted to farm life, cooking, driving trucks for harvest, and raising big gardens and lots of chickens. Ruth became active in Loring Lutheran Church and was instrumental in the education of many children in Sunday school and summer bible camps. She helped start the Northern Lights 4-H Club and was a leader for over 20 years. As a Loring Women's Club Member, she contributed to many fun community events. Ruth and John were very social and enjoyed visiting and hosting neighbors and playing cards for hours. During their 69 years together, they also enjoyed traveling and went on numerous bus tours to see our beautiful country.

When Ruth had her first grandchild, she dubbed herself "Granny". She served many roles for her 10 grandchildren and 22 great-grandchildren: babysitter, mentor, sewing and quilting instructor, sports fan, faith builder, etc. 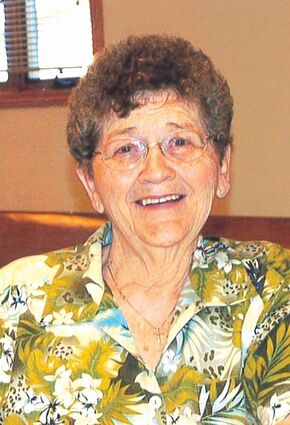 Ruth taught herself to sew and made many clothes for herself and her family. This later developed into a love of quilting. She made hundreds of quilts for family, friends, and raffles. After moving to Malta, she was a founding member of the Hands All Around Quilt Club and also made many quilts with the Malta Lutheran WELCA. She was also active in Eastern Star and PEO. For several years she enjoyed daily trips to go swimming at Sleeping Buffalo with a car full of gals. In recent years she hosted a weekly bible study with a group of friends that became very special to her.