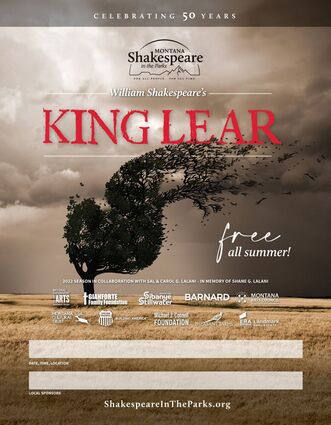 On Wednesday, June 29, at 6:30 p.m. Montana Shakespeare in the Parks, which is celebrating its 50th year, will present King Lear.

The tour, as always, started on June 15, with four nights of King Lear at Montana State University. This is followed by four nights this week, 22-25, of the other show they are doing, Twelfth Night, at MSU. They then hit the road for Hobson on the 27th and Lewistown on the 28th, before coming to Malta.

The tour this year is 77 shows over a total of 85 days, ending in Missoula and September 7.

Event organizer and member of the Shrew Crew, Anna LaBrie said, "We ar...