By Kari Hould
For the PCN 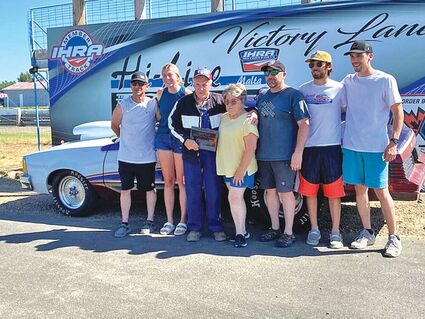 The Lloyd family racers include three generations of enthusiasts, son Lloyd, Jr., granddaughter, Ava; Dad; wife, Sharon, of Nashua; and son, Duane and his sons, Blake and Garrett, who reside in Glasgow.. Photo by Kari Hould.

As the warm air carried the vibrating sound of squealing tires, the Hi Line Drag Strip in Malta hosted a points race weekend that started on Saturday, July 16, and concluded on Sunday, July 17.

Seventy seven cars from across Montana. as far as Billings and Anaconda, from bordering North Dakota and Canada converged on the strip that boasts as "the little town with the big strip". Only four towns/cities across the Treasure State are point races and those competitions are held in Billings, Anaconda, Lewistown and Malta.

It doesn't take long for racing to get into your blood and become part of...