Life-long Phillips County resident Ruth Teske passed away peacefully in her sleep the morning of July 18, 2022, at the Hi-Line Retirement Center in Malta. Services will be held at 2 P. M. on Friday, July 22, at the Saco Lutheran Church.

Ruth was born on September 8, 1929, to Fred and Minnie Kohnlein. She attended Saco School through the 8th Grade. She then worked as a waitress in the café at the American Legion Hot Springs, later renamed Sleeping Buffalo Hot Springs. Ruth married Alfred Teske on April 2, 1953, and soon became a housewife and mother. Ruth was blessed with two daughters and two granddaughters. Ruth also helped Alfred take care of the Grandview and Reitan Cemeteries for a number of years. 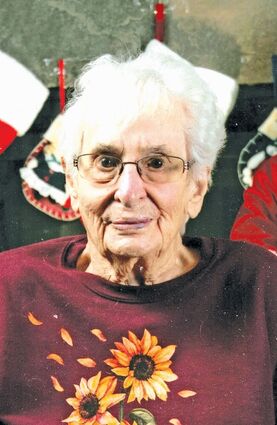 She was an awesome cook and enjoyed gardening. Ruth filled her days growing and canning her own fruits and vegetables along with growing flowers in a huge garden, and playing with her pets. She loved to read and was an avid basketball fan, listening to many games on the radio. She especially followed the North Country Mavericks, particularly Jaycee and Teagan Erickson since she had helped babysit them when they were little.

Ruth was preceded in death by her husband, Alfred; parents, Fred and Minnie; brother, Herb; and step-father, Christian.

She is survived by her two daughters, Rose Teske and Carol (Robert) Jestrab; and two granddaughters, Kimberly and Sara Jestrab.

Memorials in Ruth's honor can be made to the Hi-Line Retirement Center or Phillips County Historical Society.