Don't think of her as gone away, her journey's just begun

Life holds so many facets, this earth is only one.

In a place of warmth and comfort where there are no days or years.

Think how she must be wishing that we could know today

How nothing but our sadness, can really pass away.

For nothing loved is ever lost and she was loved so much.

Marlyn Gloyne Orahood was born March 10, 1937, to Walter and Della (Emerson) Gloyne. She was the oldest of three children. Marlyn married Wesley Orahood March 28, 1958, after knowing him for 5 months and 5 days. Marlyn left to be with Wesley on Friday August 19, 2022, 41 days after Wesley blazed the trail for their next chapter.

A memorial service will be held at Wilderness Funeral Home in Malta, MT, on Tuesday, August 30, at 1:00 p.m.

Marlyn was raised on the family ranch west of Harlem. She graduated from Harlem High School in 1955. In the fall of 1957 Marlyn's teaching career began at the Prairie Union School in southern Phillips County. Marlyn taught school in Phillips County for 28 years, retiring in 1990.

Marlyn and Wesley had four children, Ludell, Lynne, Lori, and Jim whom they raised at the ranch on Tallow Creek.

Marlyn and Wesley had many adventures along the way. In the early 1960's, as well as ranching they also raced chariots and chuckwagons with her dad and brother John. In 1963 Marlyn won a relay race from Hinsdale to Saco. In 64 years of marriage, they missed very few country dances at First Creek Hall. During the 70's they were regular participants in the Milk River Wagon Train.

Marlyn spent her summers and weekends haying, farming and ranching. Winters were spent teaching until 1990 when she moved to the ranch full time. In 2005 she and Wesley moved to Malta. 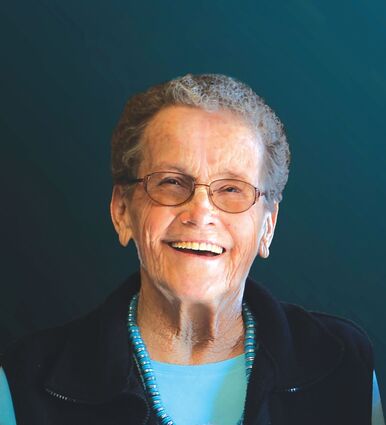 Reception to follow the service at the VFW in Malta.