Havoc on the Hi-Line a success 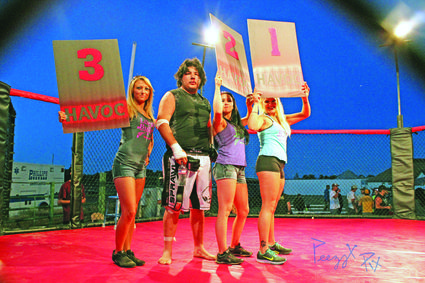 Heavyweight Warren Brockie stands with the Havoc on the Hi-Line ring girls after his win against Malta's Travis Lamb in Havoc's main event last Saturday night in Dodson at the Fairgrounds.

If the first Havoc on the Hi-Line MMA event had one theme, it would be adversity. Many of the fights ended in comeback wins.

The event which was held last Saturday at the Dodson Fairgrounds hosted a loud and enthusiastic crowd that was thoroughly entertained by twelve fighters.

The night featured six amateur matches that provided plenty of entertainment. The event saw one decision, one submission and four Technical Knockouts.

Havoc on the Hi-Line was officiated by Ted Ryder, who was impressed with how the night went though many of the fighters were first timers.

"I've been to a whole bunch of these and every one except for this one, somebody always quits," Ryder said. "They realize they're in over their heads and in this event, no one quit, everyone gave it their all. I think all of the fighters need to be commended. They did an outstanding job."

Brockie found himself on the losing end of the match throughout the first two rounds as Lamb a seasoned wrestler kept Brockie on the ground for most of the match.

It was a match that nearly got called near the end of the second round. Then the time judge blew the horn.

"I've never been in a cage fight," Lamb said before his match. "I watch it on TV, I like the look of it and I've spent the majority of my life either wrestling or in martial arts or self defense. So it's a good way to test your skills out."

Upon hearing that he was in the main event Lamb admitted he didn't want to let down Wes Killeagle who was co-promoter of the event with Shawn Bell.

Later that day Lamb would not let the crowd down as both fighters were a bloody mess heading into round three.

Lamb, obviously tired, stumbled and missed a takedown attempt, then Brockie capitalized landing two hard knees to Lamb's side before referee Ryder called for a stoppage in the match 1:16 into the third round.

"On the scorecard, (Lamb) was probably ahead," Ryder said. "So if he's not hurt, I'm going to give him a chance to fight back but as soon as he caught the knee, there's no point in letting it go further and letting someone get hurt."

Brockie a former boxer, who has a few MMA fights under his belt, saw his first action in two years and plans on making a full comeback to the sport after his win. 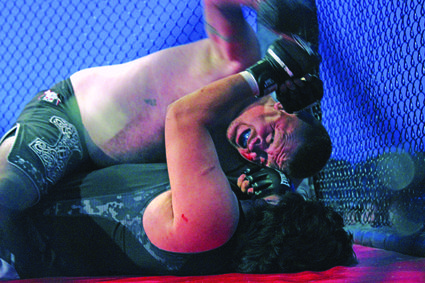 Malta's Travis Lamb attempts to ground and pound his opponent, Fort Belknap's Warren Brockie, during the MMA action in Dodson on Saturday night. See story on page 1B.

"I do plan fighting in the future," Brockie said after his win. "It's a fun sport and takes guts to go in there and walk out with a loss or a win."

He later said that he plans to go home and rest up and start training this week.

Brockie gave thanks to Derrick Azure and Seven Generations who trained him.

"He was the one that kind of showed me how to fight," Brockie said. "I do this sport because it's fun, competitive and all about martial arts and I started because I was bullied a lot growing up."

He admitted he was encouraged by his father to defend himself but he was taught never to be the aggressor.

Brockie said that before his fight, he was quite impressed with the quality of the other fights.