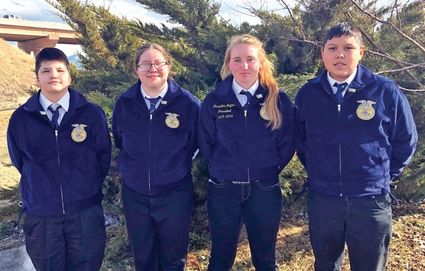 The Dodson FFA Chapter traveled to Bozeman for the State FFA Leadership Convention April 3-April 6. Representing the chapter were Christina Jaynes, Littleman Iron Bear, Ithay Heck, and Treyten Stiffarm. During the three-day convention, the students competed in the Livestock Judging and Mechanics Career Development Events. Christina led the team in each event.

During the Thursday night general session, the Dodson FFA chapter was recognized as a new chapter and the students signed the chapter charter, officially forming the Dodson FFA Chapter.