Campers and camp coaches pose for a photo at the 2019 Little M-ette Basketball Camp last Thursday.

"Awesome to be able to see the rising young talent the M-Ettes have year after year," Knudsen said. "My goal is to encourage those girls to be even better then what they think they can be. I feel very fortunate having the opportunity to come back and to be able to interact with them. As always, I appreciate Nate (M-ette Coach Nate Hammond) for being so welcoming."

The camp which hosted 50 girls from third grade to eighth grade started on Monday, June 24, and ended on Wednesday, June 26. The camp ran from 9 a.m. to 12 noon.

"We have a lot of young kids here," Coach Hammond said. "About half of our kids are below fifth grade, so we have to do a lot of things that are fun and not real in depth."

He went on to say that they were able to work on more technical details with the older kids.

The groups worked in rotating stations that including instruction from the aforementioned M-ettes and Knudsen. Those stations including post-moves, shooting, layups, dribbling and on ball defensive drills.

Since the basketball season, the M-ettes have competed in Williston, Billings (at MSUB), and in Malta. 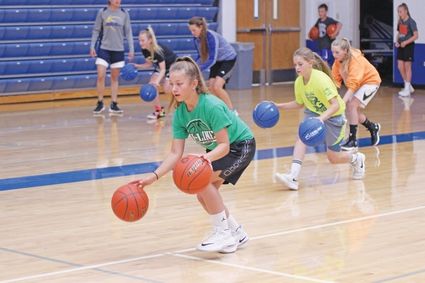 The Camp contest winners included Gracie Wasson swept her group's events. Wasson won the fourth grade Free Throw competition, sinking 19 of 26 shots. She won 1-on-1 with a score of 18 and hot shot with a total of 73. Her totals in all three events were the highest amongst all campers.

In the fourth grade group Neva Jacobson made the most free throws going 16-of-28 from the Charity Stripe. Denvyr Tuss won the 1-on-1 contest with a score of 13. Kylie Bishop won Hot Shot with a score of 61.

In the third grade group Maddy Tatafu won the free throw contest making 14-of-26 shots. Sienna Simanton won 1-on-1 with a score of 15. Hadley Hammond won Hot Shot with a score of 44.