Malta has lost a third of their starters to injury 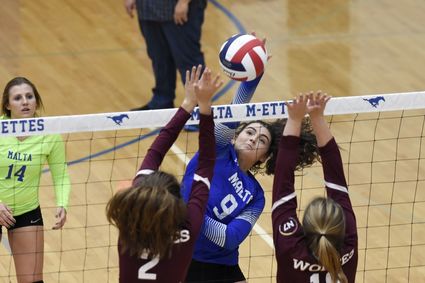 Senior Macy Williamson squeezes a kill in between two Lady Wolves in their 3-1 loss to Wolf Point in Malta last Saturday, September 21.

It was a rough week for the Malta M-ettes (1-5) as the team dropped three games last week, falling to Chinook, Harlem, and Wolf Point.

"It has been a tough week for us," Malta M-ette Co-Head Coach Kalli Rummel said. "We have been on two weeks of having three games. There has been a lot of pregame practice, a lot of bus rides, and sickness is going around."

The team has also been dealing with the injury bug as two of their starters have been sat. Starting hitter Kelbee Denham, a senior, will miss the rest of the season due to a leg injury.

Malta went the distance with the Harlem Lady Cats in...