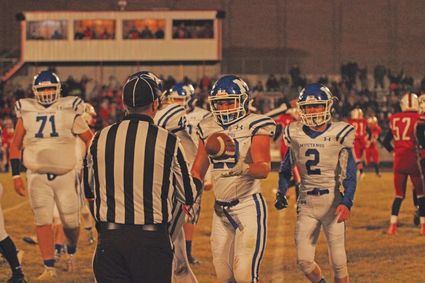 Malta linebacker Cash Salsbery hands the referee the ball after recovering a fumble in Malta's 16-8 win over Glasgow last Friday night in Glasgow.

The Malta Mustangs stepped up to defeat the Glasgow Scotties 16-8 in Glasgow on Friday, October 11, in a game that likely earned the Mustangs a first-round playoff home game.

Things won't get any easier for Malta as they go to Fairfield to take on the reigning Class B State Champion Eagles, who are on an 18-game win streak.

"Their coaching staff always has them so well-prepared and they rarely make any mistakes," Malta Mustangs Coach Nick Oxarart said. "We will have to play a nearly perfect game to give ourselves a chance in Fairfield. They have a dangerous quarterback that will be very tou...