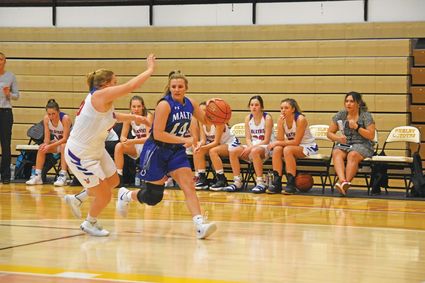 Kylie Hunter drives down the court in Malta's win over Bigfork.

\ The Malta M-ettes basketball team kicked off the season with an overtime win over the Bigfork Valkyries on Thursday, December 12, as the team participated in the 2019 Shelby Coyote Classic.

"They were one of the top teams in the west," M-ette Head Coach Nate Hammond told the PCN. "They were fourth in their division and three of their top four scorers are back. They are expected to be one of the tougher teams over there, so it was a good win for us."

The M-ettes went on to lose 65-21 to the Belt Huskies on Friday, December 13, their second and final game last week.

"We only have two senior...