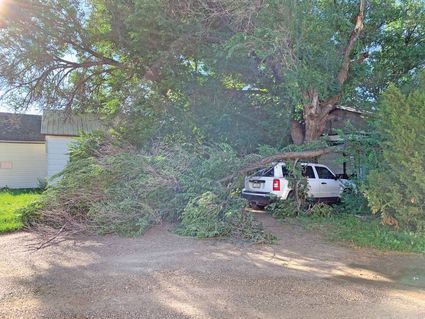 One of many trees to be toppled from high winds in Malta last Tuesday.

Winds up to nearly 90 miles per hour, hail, heavy rain, and even a small tornado in Dodson ripped through Phillips County last week, knocking over trees, ripping shingles off roofs, and leaving many without power for over 24 hours last Tuesday evening.

Shortly after the power went out in Malta, sirens went off as two Phillips County Ambulance Service vehicles, a Phillips County Sheriff's deputy and members of the Phillips County Volunteer Fire Department headed to Dodson where a 5th-wheel camper and a dual-tired pickup truck were blown off Highway 2. Caitlin Anderson reported lots of trees down on her and Tanner's property near Dodson as well as a grain bin that was picked up and blown a half-mile into their horse pasture.

Big Flat Electric Co-op had the power back on in Malta after a few minutes of it going out, but took longer in Saco, Whitewater, Loring, Southern Phillips County. In Saco, a crew battled to replace seven broken power poles. By Thursday, July 9, the Big Flat crews had restored power to most in Phillips County except from the Frenchman area. Big Flat thanked the folks living in the Frenchman area for their patience as crews worked on the outages.

The next morning, trees and branches were everywhere in Malta. Hail ranging from 1 to 2 inches in size was reported from all over Eastern Montana and baseball-sized hail was reported near Roundup.