M-ettes fall to Havre in Malta 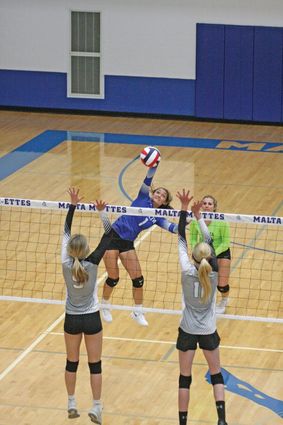 The Malta M-ettes suffered a loss to the Class A Havre Blue Ponies last Thursday, September 10, but the team hopes to bounce back as it prepares to host the Wolf Point Wolves this Saturday, during the team's homecoming game on Saturday, September 19.

Malta was led by junior Justine Lamb who had nine of Malta's 15 kills. Erica Smith had 13 of Malta's 44 digs. Sidney Meeks and Skylie Lefdahl each had one ace. Madison Williamson had eight of Malta's 15 assists.

Though Malta stayed with Havre in the first game, things went awry before Havre's 23rd point. The team was missing coverage in the middle.

"We need to control our errors," Coach Hines said. "In the second set we just couldn't put it together and in the third set we were so close, Erica started us out with some phenomenal serves coupled with Justine's hot middle hits we came out of the gate at 6-0 us."

After the 6-0 start in the third set, Havre called a timeout, made some adjustments, and scored on an outside attack. The Blue Ponies rode the momentum and won the set.

Despite the loss, Coach Hines is proud of the effort he M-ette put forth. 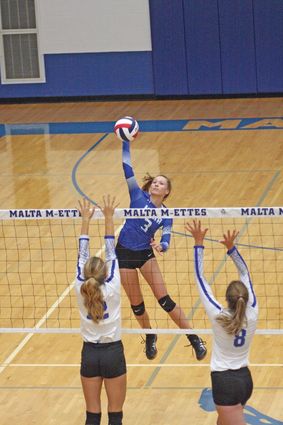 Justine Lamb goes up for an attack in Malta's loss to Havre.

"All in all we played well," Coach Hines said. "The girls played together very well, we just need to control our mistakes and finish at the net."

Coach Hines said that the team will be looking to improve their serve-receive during the next week of practice. They also hope to increase our hitting percentage.

"It comes back to taking smart risks, and that's just something that takes a bit

to really grasp," Coach Hines said. "We have a great group of young ladies who are more than willing to put the time in and learn from their mistakes and that is exciting, sure we'll make some errors but the growth we're going to see from this group is going to be huge!"

Malta is scheduled to play Wolf Point on Saturday, September 19. Games will start at 1 p.m.