Mustangs pick up wins over 2B foes 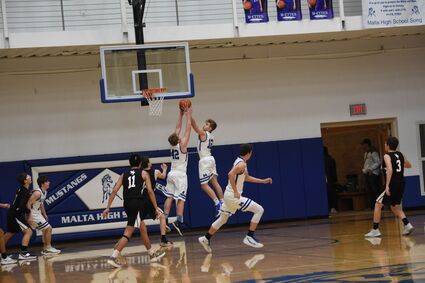 Malta seniors Pierce Mortenson and Kooper Oxarart go up for a rebound in Malta's win over Wolf Point. Photo by DoDee Oxarart.

In Malta's win over Harlem, senior Kooper Oxarart scored a career high of 38 points, 25 of which came in the first half of the game.

Oxarart, and fellow senior Pierce Mortenson, were honored prior to the Poplar game for Malta High School's senior night. The Mustangs were able to celebrate with a 65-44 win over the Poplar Indians.