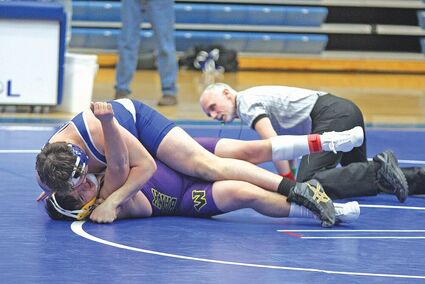 The Malta Mustangs Wrestling team fared well in their final home mixer of the 2021 wrestling season, going 8-1 in their matches on Saturday, February 13, at the Malta High School gymnasium.

"I was really impressed because they are just starting to come around and we are seeing a lot of good things," Malta Head Coach Jake French said of the team's performance in Malta.

The Mustangs also traveled to Glasgow on Friday, February 12, for mixer action against the Broadus and Glasgow wrestling teams. The team went 4-5.

French, a fourth-year senior, was able to pick up a win in his final match at Malta High School by pinning Broadus' Gavin Severide 44 seconds into the second round. It was French's second match of the day.

"It feels good," Colt said. "I kept constant pressure on top, not letting him get on my legs, and sticking to the basics helped."

"I was really glad to see Cut Bank and Broadus come here because they are two very tough teams," Colt said.

Keeling won his only match of the day by a 9-1 decision over Cut Bank's Jeremy Gallagher.

Sophomore Cameron Mikesell, the lightest wrestler on Malta's rotation at 126 pounds, was in the leadoff match for both rounds, and won both of his matches, though he was critical of his performance.

"I need to work on the little things," Mikesell said. "I think that we are in pretty good condition."

"He was a tough kid," Mears said. "He was fast and knew what he was doing. He was pretty experienced."

"He was a pretty strong kid," Mears said. "I just moved my feet a lot and took good shots, stayed strong on top, and didn't stay on bottom very long."

The Mears brothers were both selected as Malta's Wrestlers of the Week. 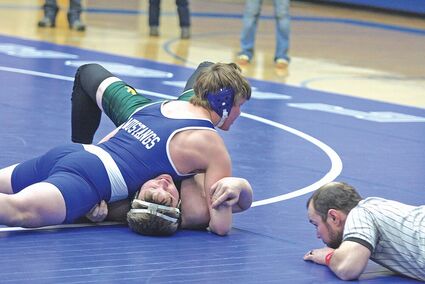 Colt French picked up a win by pin fall in his last match at Malta High School last Saturday. The mixer event was Malta's Senior Night.

In Glasgow, Mikesell won his lone match of the day, pinning Glasgow's Dawson Boland in 1:18, the Quick Pin of the Week.

French won his match against Glasgow's Ethan Nickels by 4-0 decision.

In the second round of matches, Co. Mears pinned Alex Edwards of Broadus in 1:59.

In the very next match, Cam. Mears won his match over Glasgow's Damien Nesbitt in a 6-4 decision in overtime.

The match was selected as Malta's Most Exciting Match.

"Camryn just toughed it out, sucked it up, and ended up the winner," Coach French said.