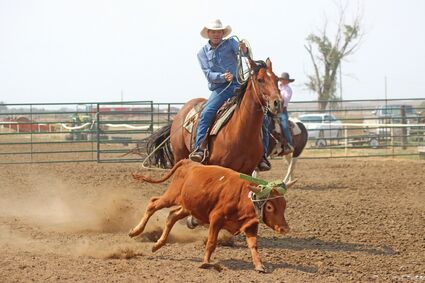 It was RCAN's second year hosting the event.

"I don't think that it could've gone better," RCAN President Katie Brown said of the event. "It went good. No one got hauled out in an ambulance. No livestock were injured, and it went smooth and right on time."

The event was in a two-hour time crunch, starting at 2 p.m. and concluding at 4 p.m. Due to time constraints, there was no top-five event, only the timed Ranch Scramble events which included, Penning, Trailering, Doctoring, Branding, and Tie-Down.

The event was won by the roping group named 4 Amigos consisting of Jesse Benson, Ted Brown, Reed Pankratz, and Ken Salveson. The team's time was 2:57.15.

Second place went to Better Late Than Never, a team consisting of Wayne French, Jeret Warren, Austin Sibley, and Tanner Brendt. The team was indeed a split second too late, posting a time of 2:58.

Third place went to Where's the Beef, a team consisting of Jason Beil, Jesse Gray, Walter Ozark, and Ted Brown. The time was 2:58.69.

Fifth place went to The Crew; Carli Simanton, Benson, Harmon, and Jake Wade. They had a time of 3:17.72.

The event had a total of 15 teams competing, and over half of the participants were from Phillips County. There were a few riders from the Grass Range Area and new teams from Valley County.

RCAN's next Ranch Rodeo event will take place on Saturday, September 4, during Saco Fun Days. At this event, RCAN is planning on having a long go and top-five event. The Wild Cow Milking event is likely to return.