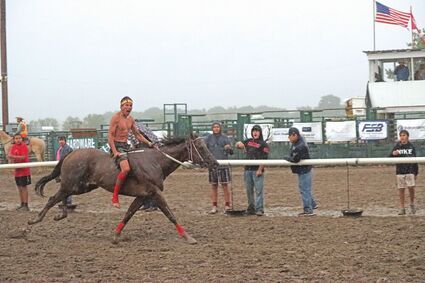 Myles Murray of Young Money celebrates as he reaches the end of a rainy, muddy, 2021 Indian Relay Championship Race at the P.C. Fair in Dodson. Photo by Pierre Bibbs.

The 106th Phillips County Fair Indian Relay was held on Sunday, August 8, and though it was chilly in the grandstands, all went well until the last hour of races. Then it turned epic.

A torrential downpour at 5:50 p.m., which shut down the Indian Relay event for a half-hour. Despite the rain falling during the Chariot Races, Women's Mile-Race, Consolation Championship, and Championship races, no one was hurt, resulting in a dramatic conclusion to the P.C. Fair.

The Men's Championship race was won by Young Money, a team from Browning, that also won all four memorial races and the Women's Rel...