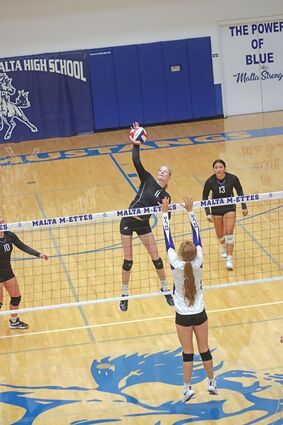 Teagan Erickson goes up for an attack in North Country's loss to Malta on Tuesday, September 14, in Malta. Photo by Pierre Bibbs.

It was a tough week for the North Country Mavericks Volleyball team as they dropped a couple of games.

"We had a rough week battling through some rotation changes and missing a starter who was out on Saturday," Coach Charlene Wasson said. "Sometimes it is hard to make changes but you have to do them to see what opportunities you are missing and if the things you think will help really will."

The team will try to rebound this week as they take on the District 2B Ha...