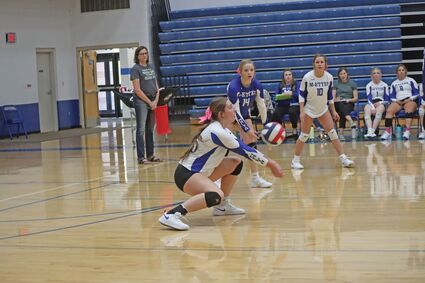 M-ette Rylee Hines gets a dig in an earlier game. Photo by Pierre Bibbs.

The Malta M-ettes volleyball team racked up a few wins last week as they defeated the Harlem Wildcats, Cut Bank Wolves, and the Wolf Point Wolves.

Though Malta has won their last four games, the M-ettes are not focusing on the past.

"By the numbers, we're having a great run but our focus at games remains consistent, we fight for each point, of each set, of each game," Malta Head Coach Tasha Hines said. "We know our focus needs to be on the next point, not the end result, and these young ladies get it and have brought the winning mindset to the table."

This week the M-ettes will travel to Wh...