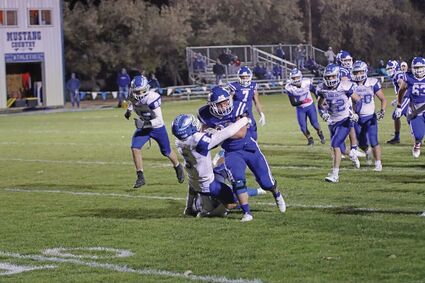 Cash Salsbery runs through a Fairfield defender in the team's 30-14 victory over the Eagles in Malta last Friday. Photo by Pierre Bibbs.

The Malta Mustangs are headed into the 2021 MHSA Class B Football Championship Series as the first seed in the North after posting a perfect 8-0 regular-season record.

"It feels great," Malta senior quarterback Connor Tuss said on the team's undefeated season. "It's been four years, but we have been working hard every year. All of those summers, we put in the work and it has finally paid off for us as seniors."

The Mustangs were able to make history last Friday, October 22, as the first Malta Football team to defeat the Fairfield Eagles since 1991. The score was 30-14.

The Mustangs will be...