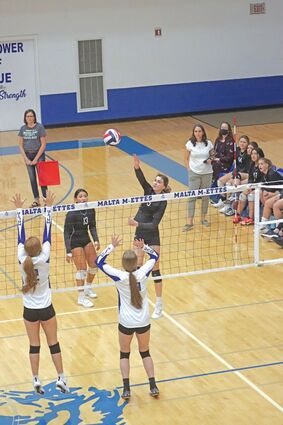 Sophomore Paige Wasson goes up for an attack in a game against Malta. Wasson earned All-State Honors in 2021. Photo by Pierre Bibbs.

The North Country Mavericks Volleyball had four athletes listed in the 2021 District 1C All-Conference and All-State list a couple of weeks ago.

In a crowded 11 team conference, the team was able to land two All-State placements, Paige Wasson and Jaycee Erickson. Both were also listed with first-team honors. Zandora Longtree was also named to the first team, while Teagan Erickson earned second-team honors.

Wasson showed her versatility in th...