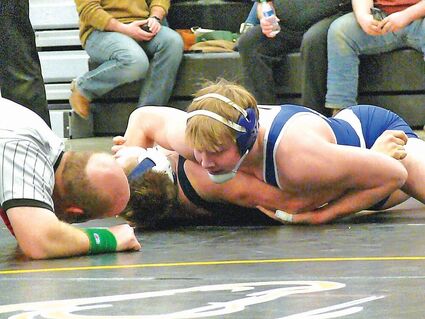 Spencer Gibbs was fourth in the 170-pound weight class at the Eastern B-C Divisional. Photos by Jamie Jones.

The Malta Mustangs went into the 2022 Eastern B-C Divisionals in Colstrip on February 4-5, with the hopes of getting at least half of their eight wrestlers to the state meet. They ended up with seven out of eight.

"I am pleasantly surprised that we have seven going down to state," said Head Coach Jake French. "We had talked to the school beforehand about taking a couple of the school cars down to state. Now we need to take a bus. It's a great problem to have."

Huntley Project took home the team title with a total of 288 points. Glasgow finished second with 153.5 points, and Columbus/Absarok...