M-ettes head into 2B District Tourney 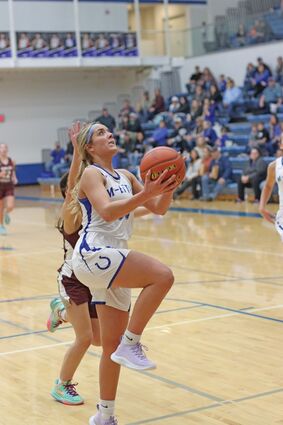 Addy Anderson scores on a fastbreak layup in the M-ettes 66-46 win over Harlem Monday, Feb. 7, in Malta. Photo by Pierre Bibbs.

The Malta M-ettes basketball team enters the District 2B Tournament as this week's top seed after posting a perfect 8-0 record against district opponents.

The M-ettes concluded their regular season with three wins last week, defeating the Harlem Lady Wildcats 66-46 on Monday, February 7, in Malta. Then the team defeated the Poplar Lady Indians 80-43 in Malta. They defeated Shelby 57-27 in the last game of the season.

The M-ettes will face the winner of Harlem and Poplar's Game 1 clash.

Malta had previously defeated both teams last week, and if they can win one once more they will likely se...