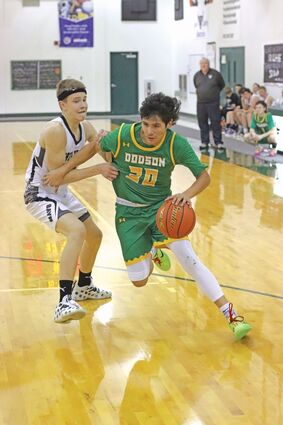 Dodson's Kadin Racine drives towards the bucket, while being defended my North Country's Blaine Downing. Photo by Pierre Bibbs.

The North Country Mavericks and Dodson Coyotes are headed to the postseason and both teams are hoping to be two of three teams to punch their tickets to the Eastern C Divisional tournament set to start on Wednesday, March 2.

In order to advance, the Coyotes and Mavericks will need to finish in the top three at the 3C District Tournament in Wolf Point, set to start on Wednesday, February 16, and conclude on Saturday, February 19.

The two Phillips County teams faced off on Tuesday, February 8, in Whitewater. The Mavs won 57-47.

"It was definitely sloppy, but the one thing that I did see was t...