Mildred was born, with assistance from a midwife, on a homestead on the plains of northeast Montana in the small community of Forks near the town of Whitewater. She was the 3rd of 8 children, 2 girls and 6 boys, born to George and Ethel Green. At the age of 18, she graduated from Malta High School and married the love of her life, Lynn Boothe, who had enlisted in the Naval Air Corps and was stationed in Detroit at the time. They claimed to be the cutest couple from Malta who honeymooned in Detroit that year. They celebrated their 70th wedding anniversary in 2015 shortly before Lynn died.

Five months after the marriage, tragedy struck when Mildred's parents were killed in a head-on collision with a drunk driver. She and Lynn, and her sister Margaret and husband Jim, took in their four youngest brothers to live with them. Mildred and Lynn later added four of their own children, Ronald, Kathy, Gary, and Mark, to their family.

Mildred had a strong Christian faith and was an active member of the Lutheran Church her entire life. She began each day by reciting the bible verse, "This is the day the Lord has made. We will rejoice and be glad in it." In her 95 years on this earth she experienced countless joys, as well as numerous losses and sorrows, and always took comfort from the biblical story of Mary, about whom it is said, "she treasured up all the things she had experienced and pondered them in her heart." Mildred's children especially remember the numerous acts of kindness they observed her quietly performing while they were growing up, such as picking up and delivering groceries and offering rides into town to neighbors.

Mildred and her husband Lynn had two separate successful careers. They farmed and ranched north of Malta from 1945 when they were married until 1972 when they sold the farm and purchased a hardware store on front street in Malta that they ran for 30 years before retiring.

Mildred loved her family. Her children have many precious memories, such as being woken up in the wee hours on Christmas mornings because she was so excited to see them open their presents that she could not wait until they woke up on their own. In later years she transferred this same love to her grandchildren and great-grandchildren. She placed a sign on her desk at the Hardware Store that said, "If I would have known how much fun grandkids were, I would have had them first."

Mildred always enjoyed creating things. As a young adult, she crocheted a large collection of doll dresses. In later years she cross-stitched beautiful wall hangings for her children and grandchildren, and in retirement attended painting classes with her daughter Kathy. She was a very good cook with skills honed during many years on the farm preparing meals for both family and farm-hand workers with hearty appetites, sometimes in sizeable numbers during busy harvest periods. Her children still have fond cravings for her cream puffs, and in later years she delighted grandchildren, and then great-grandchildren, by demonstrating how to make maple bars.

A highlight of Mildred's life was reconnecting with her Norwegian relatives. When her father, George Green, a homesteading immigrant from Norway, and his wife Ethel, were killed unexpectedly in the automobile accident in 1945, the children lost contact with his Norwegian relatives. Then in 1973, Mildred was able to re-establish that connection and correspond with long-lost uncles, aunts, and cousins. Following visits of several Norwegian relatives to Montana, Mildred was able to make a personal visit to Norway where she had the highly emotional experience of being able to see and touch the school desk where her father had carved his initials as a boy, and being allowed to see a book kept at a Norwegian Church located near the Green family farm that contained hundreds of years of family records such as baptisms and confirmations.

Mildred and Lynn were able to travel frequently, both domestically and sometimes to foreign countries, often in conjunction with store meetings related to their hardware store, and through bonus trips, they won based on the numbers of large appliances they sold. They invited their children, and sometimes grandchildren, to join them on several of these trips, and the many wonderful memories from these trips are cherished.

After retiring, Mildred and Lynn moved to Billings where they enjoyed living in a condo near their daughter Kathy and (late) husband Robert Barnes. Later, following the death of Lynn and having experienced a stroke, Mildred spent her last several years in assisted living facilities, first in Billings near her daughter Kathy and husband Larry Quanbeck, and more recently in Tacoma, Washington, near her son Ron Boothe and wife Marilyn. Those retirement years during which family members were able to spend quality time with both Mildred and Lynn are especially valued. Many memories, as well as cups of coffee, were shared. 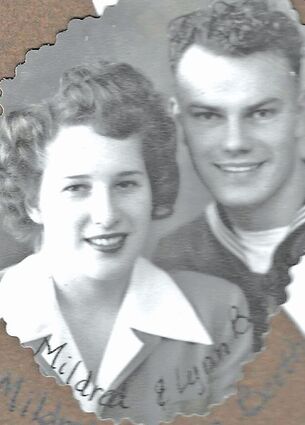 A memorial and graveside service will be held this summer in Billings. Interment will be at the Yellowstone Veterans Cemetery in Laurel where Lynn is also laid to rest. We hope that many Greens and Boothes and others who knew Mildred will be able to join us as we celebrate her life.

In lieu of flowers, the family suggests a gift to Lutheran World Relief or a similar charitable organization.