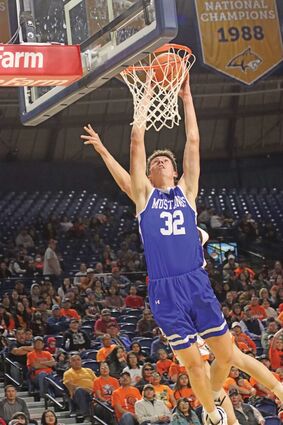 Senior Connor Tuss puts down one of his two dunks in Malta's loss to Lodge Grass last Saturday in Bozeman at the State B Boys Basketball Tournament. Photo by Pierre Bibbs.

The Malta Mustangs basketball team met up with the two-time State B Champion Lodge Grass Indians, though not the way they had anticipated.

Malta was defeated 67-63 by the Indians, in the consolation semi-finals on Saturday, March 12, at the 2022 State Basketball Tournament in Bozeman. Lodge Grass went on to defeat the Shelby Coyotes in the third-place game 63-49.

"I thought our effort was good," Malta Head Coach David Costin said. "I am proud of the guys. We competed. We battled against a very good team. A very experienced team. They are back-to-back state champions. The effort was good an...