Madness Takes Over the Lucky Bullet with a Record Night 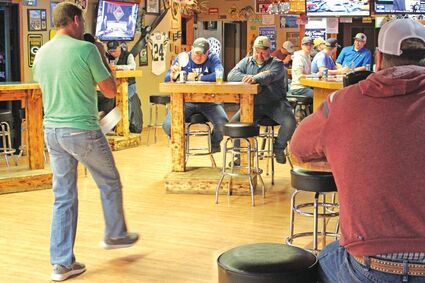 Auctioneer Darrell Carney coaxes more out of the bidders during the March Madness Calcutta at the Lucky Bullet. Photo by Mark Foss.

March Madness took over the Lucky Bullet on Tuesday, March 15, as local basketball fans gathered to bid on teams for a good cause.

The March Madness Calcutta that is held every year as a fundraiser for the Health-Care Foundation of Phillips County was held with 18 bidders raising paddles for themselves and their businesses to get the teams that they thought would win it all.

The madness part of the night came from auctioneer Darrell Carney. He kept the night lively and moving along, always pushing and trying to get a higher bid for the foundation. He also had fun with some of the team names...