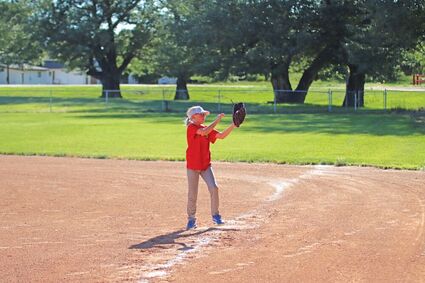 Brooke Negus makes at catch at first base. Photo by Pierre Bibbs.

This season, the league is under new leadership, as Kenny Murray, a Malta native, hopes to bring the same passion for the sport that he saw growing up, back to his hometown.

Things seem to be off to a solid start. Between T-Ball and Coach Pitch and Little League baseball, the league has had over 100 kids sign up.

"This year is really just about getting participation," Murray said. "It's new to Malta right now. I know that Dean (Yeadon) was doing a good job keeping it rolling and getting it back going in Malta."