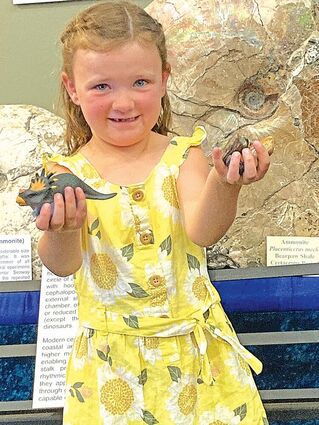 Livia Turner guessed 1001 shark teeth in the jar and there were 1004! She won a handful of shiny rocks and a triceratops! Photo by Dixie Stordahl.

"We had a great kids day and it was just overwhelming but very exciting because people were so excited to see what we have here and see the wonderful resources that are local," Booth said.

Booth said that people came from around the county, out of county, and out of state.

"We were looking around and saw that there were campers from out of state, that were just driving by (and attended the event)," she said. "That's the cool thing about where we are at on Highway 2. People notice us and stop."

Booth said that the Great Plains Dinosaur Museum and the Phillips County Museum both saw plenty of patrons on Dino Day.

The Beverages and Bones event started at 4 p.m. The yearly event is the Great Plains Dinosaur Museum's biggest fundraiser of the year.

The museum is currently on the search for a new paleontologist, though they may also have an administrative role. Dr. Cary Woodruff is heading to Frost Museum in Miami, Flo. Dr. Woodruff doesn't have to physically report to the Frost Museum in Miami until September, but the group is in the area this summer.

"I'm still around consulting with (GPDM), which is nice because even though I am no longer with the museum, I will still be associated with the museum and it's future endeavors," Dr. Woodruff said.

Though the Beverages and Bones event existed under a different name for years before Dr. Woodruff worked for GPDM, he added the new exhibit phase to the event.

"Last year was the whole redo of the interior," Dr. Woodruff said.

He was then asked what the annual Beverages and Bones event means to him.

"When I started here, we had folks in town that had been here and had never been in the museum, at all," Dr. Woodruff said. "They would pass here twice a day (without stopping.) That was really sad."

He said that the event brought in people from outside of Phillips County as well as those that used to drive past.

"The fact that we see more people from our community here every year means that this was a success," Dr. Woodruff said. "Mission accomplished."

Dr. Woodruff offered his appreciation to those in the town of Malta and Phillips County.

"This has been a heck of a seven-year (run)," he said. "It's been wonderful. I appreciate all of the support of the town and community. I couldn't have done it without everyone."

Booth had kind words to say of Woodruff.

"We are so appreciative of Cary and what he brought to the museum," Booth said of Dr. Woodruff. "We kind of all grew together and it's been really rewarding. To see him get this awesome opportunity makes us feel good. We are sorry to see him go, especially as far as Florida, but he has created a good program that we are continuing."

GPDM currently has a dig program going on in Grass Range, but will eventually come back around the PC area.

To sign up for a dinosaur dig contact the Great Plains Dinosaur Museum. Spots are full for July.