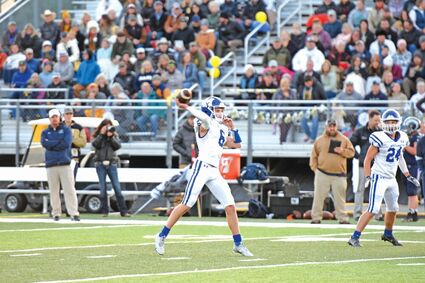 Stockton Oxarart had two offensive touchdowns last Friday in the team's win over Red Lodge. Oxarart also led Malta's defense with three interceptions and a fumble recovery as a defensive back. Photo by DoDee Oxarart.

The Mustangs will celebrate their 100th Year on Friday, September 16, during Malta's Homecoming Game against the Shepherd Mustangs, at 7 p.m.

Malta Public Schools posted on their social media site that they are inviting all former Mustangs to take a photo together on Mustang Field after the game.

Malta Head Coach Nick Oxarart has been a part of the Mustang Football Team for 20 years, including the 1996 championship team as a player, and an assistant coach...