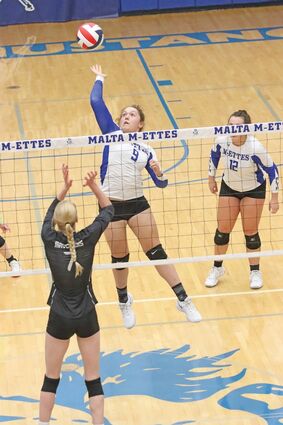 Malta freshman Denvyr Tuss goes up for an attack in Malta's win over North Country last Thursday in Malta. Photo by Pierre Bibbs.

The Malta M-ettes and North Country volleyball teams met in Malta last Thursday, September 29. This time around, the Malta M-ettes avenged their first and only loss of the season, defeating the Mavs 3-1.

The M-ettes were led by Isabel Hansen and Alli Kunze who both had nine kills. Kennedy Koss had 22 digs, Hansen had 19 digs, and Tia Siewing had 17 digs.

"We were all sick this week so we all thought that we were going to come out and lose, so we just decided to leave everything out on the court," Co-Captain Hansen said. "W...