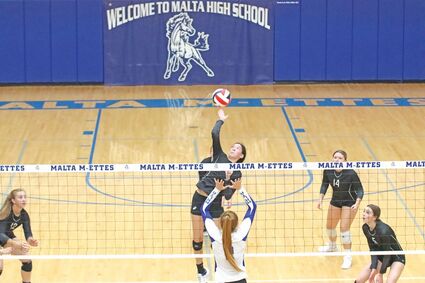 Kendall Scheffelmear goes up for an attack in an earlier game. Photo by Pierre Bibbs.

The North Country Mavericks Volleyball team overcame some adversity in the 1C District Tournament, an event that featured 11 teams each trying to earn one of three spots in this weekend's Eastern C Tournament in Culbertson.

The Mavericks will enter the Eastern C as the 1C's second seed after their championship loss to Froid-Lake, a team that defeated the Mavericks twice in the tournament last weekend in Plentywood.

"We felt like we put on a very good showing at Districts ending up where we were...