Rita Mae Pray was born September 11, 1929, in Wallace Idaho, to Thomas and Lillian Shields of Burke Idaho. Her father died in the mines four years later. She lived with Lilian in Burke until she was 16 , and attended public school. She then moved to Spokane where she finished school and graduated as salutatorian of her class. She went on to trade school. She then married Ben Majors and had a daughter, Patricia, in 1951. After divorcing Ben, she and her daughter moved to Malta where her sister, Margaret lived. She stayed and worked as a clerk at Jeri's 5 & Dime for two years. She then, with her daughter, returned to Spokane to live with Lilian and worked at Gonzaga University for some time.

Just before leaving Malta, She met Bill Pray who shortly thereafter flew to Spokane and proposed marriage to Rita. She, Patricia and a parakeet boarded the plane bound for Great Falls where Bill and Rita married in 1955. She then bore another child, Tracy, six years later.

She remained in Malta with Bill, raised her children and worked in different capacities, professionally, as well as serving for her church and other community endeavors..

Rita was beloved by all that knew her.

The Mayor of Malta declared one day in January 2013 in her honor, Rita Pray day, upon her retirement for her years of service to the council on the aging. 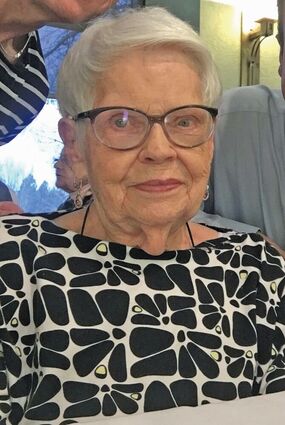 At 83, Rita launched another chapter in her life after her husband passed and moved back to the mountains to live in Missoula where she lived independently until her passing. She again collected people and made friends, learned new streets and conquered her fear of heights in her 7th story apartment on the river. She attended symphonies with her beloved new friend Deloras Engan, She enjoyed summer visits to Flathead Lake, and had to temper her newly found shopping addiction.

There wasn't much that Rita didn't succeed at if she took it in. Unfortunately, she succumbed to pneumonia, and suffered congestive heart failure on July 25th of this year at St. Pats hospital. She was surrounded by her family who held vigil at her bedside. She is survived by her son Tracy, Daughter Pat, her Grandchildren, great grandchildren and her great great grandchildren who she took wealth in her heart in their presence.

Her ashes will be buried alongside her beloved sister Margaret Messerly in the Malta cemetery , with a ceremony at the Malta Lutheran church on Saturday November 19th at 11:00.