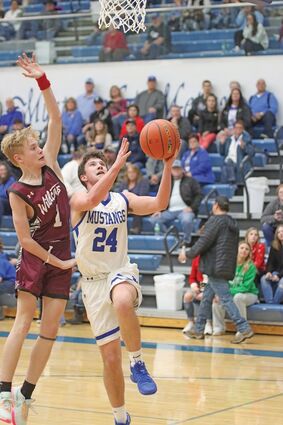 Sophomore Treyton Wilke goes up for a layup in Malta's win over Harlem earlier this season. Photos by Pierre Bibbs.

The Malta Mustangs fell to the Havre Blue Ponies on Tuesday, December 20, in Havre, and currently have a 2-3 record heading into winter break.

Malta is now in the middle of break. Their next action is scheduled for Tuesday, January 3, 2023, in Glasgow. The team was originally scheduled to face the Scotties on Thursday, December 22. That game was moved to January 3, due to the snow and -70 wind chill that hit Malta and the Hi-Line last week.

The game against Glasgow starts at 5 p.m. in the Glasgow High School Gymnasium. The Mustangs will also face the Rocky B...