40 years and counting for Whitewater Postmaster 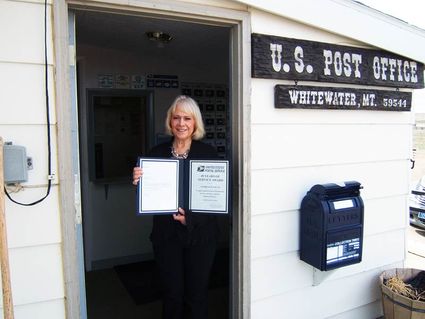 Patty Young standing in front of the United Sates Post Office in Whitewater with an award from the United State Postal Service for 40 Years of Service. She has worked at the same building she calls home since February 5, 1974.

For the last 40 years, in Whitewater, when you think United States Post Office, one person comes to mind, Postmaster Patty Young.

" It's been a blessing. I don't know how long I will be doing this, but when it's attached to your house, it's not really a hardship to go to work," said Patricia Young, postmaster of the Whitewater Post Office.

February 5 of this year marked forty years of service for Young and it doesn't look like she's leaving her post anytime soon.

Young grew up in Big Sandy, where her father, Howard Hammond was the High School principal, teacher, and coach, but eventually she made it back to the town her father called home. Howard Hammond is a well know name around Whitewater and Phillips County. His graduating Class in 1935 was the first of Whitewater High School consisting of 13 students.

"We'd come to Whitewater in the summer, because Dad had bought land here after World War II. So he farmed in the summer, and we would go back to Big Sandy for the school year."

Young graduated from Big Sandy High in 1971. Her former husband Gary Anderson is a 1970 graduate of Whitewater High School.

"Gary and I always knew each other since we were little kids... I was with Dixie Dunbar Moore a lot in the summer months, and the Dunbar and Anderson kids were always together... so we all spent time together in 4-H and just being kids.

After the couple married in 1972, they lived in Whitewater where Gary was farming and ranching.

"Rita Kinshella was the Postmaster at that time and asked Gary if I would be interested in being her PMR," said Young. "So I went to work in the Post Office, in the fall of 1973 and loved working with Rita.

Her husband, Leo, had MS, so their home was set up for Leo with picture windows and wide doors... but Rita felt she needed to get Leo closer to a VA Hospital, so she got a job at the Post Office in Wolf Creek, Mt.

"After she got the job and knew they would be leaving she asked if we would be interested in buying their home, and if I would like to become the Postmaster," said Young. "Back then, Rita did the interviewing, and recommended me for the job."

On Feb 5th,1974 Patty became the Officer in Charge. Shirley Dunbar (Dixie's mother) was the route driver, and she was a huge help.

"I was young, shy, and worried about everything... and she was always there, keeping me calm," said Young.

Young was so worried when Rita asked her if she would like to be the Postmaster, she thought had had a brain tumor.

"I even went to Dr. Wiprud to show him this tumor on the back of my head and he just smiled and said, "Patty, that is just a bone," Young reminisced. "So, I was not only shy, worried ...but also a hypochondriac.. "

The Kinshellas built the house that the Youngs own in 1964. What is unique about the property is the post office is attached to it.

The one thing that made the acquisition official, was a note written 40 years ago from Kinshella, that is still in pristine condition today at the Whitewater post office.

Forty years later, Young is still going strong, and looking like decades younger than her years of service may indicate.

Because of the help from friends and family she received during her tenure, it would seem as though she has found the fountain of youth.

Her parents helped ease the stress of running a family, household and business, by picking up a few responsibilities after Young had her children.

She also attributes her longevity to having her workplace attached to her home, She never had to start a car in the winter to go to and from work and put her children in daycare.

She does have the ability to go on vacation and has thanks to her PMR (postmaster relief) team consisting of Linda Berg and Ashley Green.

There are many things that have changed in the postal service, since Young joined the company in 74'.

"Back in those days, things were a lot easier because we didn't have that," she said pointing to the computer. "We actually mailed things to Billings," she said.

She went on to say, that Montana had their own district called the "Big Sky district," and today Montana is included with North Dakota, some of South Dakota and Minnesota.

"Back then they had money. The post office was making money and now because of the electronics that we had, it takes a lot of money to put all this technology (Computers, printers, etc.) in every office in the United states," Young told the PCN.

She also explained that back in those days, it was more about the customer.

"That's my favorite part of the job, the people," she said. "In small offices you get to know the people so well, it's like a family. So if someone moves or passes away, it's hard on a community."

She also added that the people in Whitewater are so willing to help and welcome people here.

Her job has had many more good times than rough times, but one time that was especially difficult turned into a fun memory for the Anderson family. The winter of 78'.

"I was pregnant with Ella, and the snow was up to the eves," she told the PCN. "We could not get out of town so we couldn't get mail in."

When that winter hit two pregnant women from Opheim and Turner were flown out to the hospital in helicopters. Young did not want the same treatment.

"I just kind of wanted to wait it out and see what happened," she said.

Though the road to Whitewater was closed, the family had a vehicle on the other side, ready in case of her eventual labor.

The family went to Malta one day anticipating the arrival of Ella, but after staying with a friend for two days, there was no baby, but the family was able to get the bags of mail they couldn't before. The only issue was that many in the country were not plowed out, so they couldn't get to the post office for their mail.

"Gary is a pilot, who did a lot of coyote hunting in the winter," Young told the PCN. It was apparent where this was going.

After sorting the mail and putting it into bags, the Andersons came up with the idea to air drop the bags of mail to the various farmhouses waiting for their mail.

"He just flew over and dropped the sack of mail in their yards," Young said. "Some of them called and they wanted cigarettes or milk and things like that. They were happy to get their mail and supplies.

According to Young, that was the most exciting thing that happened during her career so far.

A traumatic time for Young was a couple of years ago, when the postal service was thinking of closing many rural post offices.

"I was thinking oh no, I'm not ready to quit this," she told the PCN. "When you take a post office out of a small community that doesn't have many other businesses, it hurts. Schools and post offices are important to communities. It's their identity."

The town has had it's ups and downs, since Young has owned the post office, but she is thankful for the town of Whitewater and the ability to raise her family there.

"I think it's so nice every time I see these young people in the paper moving back here, that really shows that this life was good to them," she said also remembering the days Whitewater had a youth ranch.

The ranch was for youth that needed a positive direction. Ultimately, Patty brought Mike who moved into their family as a foster son. Mike was able to graduate from Whitewater high in 1997 and has been a member of the United States Air Force ever since. He currently lives in Germany.

"There were a lot of kids that came to the youth ranch that went on to have good lives. They needed that structure," Young said.

Whitewater has been and is a great home to many and Young is forever grateful to the community of Whitewater and to Rita Kinshella for recommended her to be postmaster 40 years ago.

She also would like to thank Rex and Betty Kaufman for the help and support in the early years of her career. And Betty Jo Compton – who was the Postmaster in Loring, MT and helped her so much in those early days.

Her contract driver, Shirley Dunbar retired last year after driving for 42 years and turning 86. Her son Pat Dunbar now runs the 56 mile route 3 days a week from Whitewater to the long ago town of Grieve, Mt. where Patty's family farm was in the summer, and now her brother, Mike, owns.