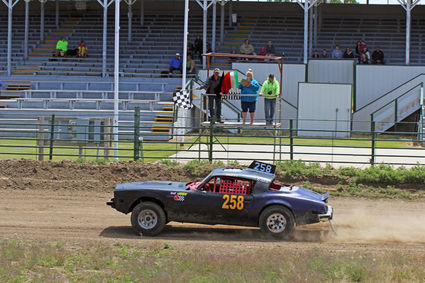 Brett Jaynes of Dodson -- in the Jaynes Ranch Car -- captures the checkered flag Sunday in Dodson.

When all the smoke cleared Havre’s Seth Hamilton brought home the first place trophy in the A main grouping.

This comes after he placed first in the second preliminary group.

Hamilton’s 79 Buick Regal seemed to have better guts than others in the race and thanks to some slick and daring driving Hamilton looks to repeat his run at the Phillips County Fair scheduled for August 3 at 4 p.m.

Another name to watch out for will be A main second place finisher Luke Brown of Malta, his trophy was sponsored by First State Bank, First Security Bank and Independence Bank, all of Malta. He drove a 1973 Chevy Impala.

Following the AMX races a Powder Puff race was ran with Corrine Hould winning the event and taking home the trophy driving Robert Kindle’s 198686 Pontiac. She was followed by Amelia Sanquins of Whitewater in 2nd place and bringing home 3rd was Katie Peterson of Malta.

Other racers included Travis Anderson, who won the opening race to place in the A main race later that morning.

Scott Hould of Malta driving his 76 Oldsmobile Cutlass looked strong, maybe the strongest on the track, however Hould pulled out of his race early due to some issues.

Sunday’s race was seen as a practice race for the Phillips County Fair races, which will feature many other racers from throughout Montana.

“All these guys are out here just to have fun,” Announcer Dale Bruckner told the PCN. “Towards the end of the season guys get serious about it.”

According to Bruckner Sunday’s races were basically held so local drivers can see how well their cars would or wouldn’t run.

Though the cars do get roughed up now and again, AMX is not a derby but a multiple lap race that can be dangerous if racers don’t respect their cars or the track.

The cars are modified so that drivers can be as safe as possible as well as their vehicles.

For instance, windows are busted out to avoid any glass. The doors and trunks are welded shut so that when drivers take on damage from other drivers, the doors don’t fling open- exposing the drivers.

The cars are all required to have roll cages, in case cars flip.

The fuel tanks are even required to be equipped with racing fuel cells so cars don’t explode.

Mud flaps are installed to bring dust kick up to a minimum, though as seen on Sunday, dust kick up can’t be avoided unless the track is watered down.

Racers are required to wear helmets with goggles or visors to protect the eyes.

If you’re in the mood for suspense, excellent driving and Plenty of “Bump and Run” action between cars, this event is a must see.