Former Mustang Schye ready to take the field for Grizzlies 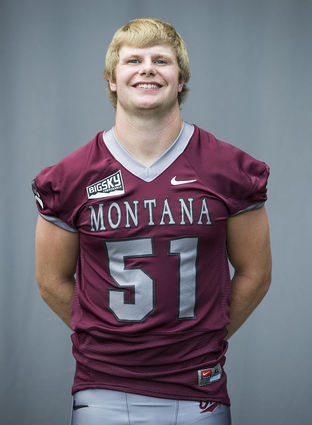 Tucker Schye as a Mustang was a beast, recording 100 tackles and 20 sacks his senior year. He red-shirted as a freshmen in 2013 and now is ready to take the field as a part of the University of Montana Grizzlies' defense and special teams unit.

Former Mustang football and basketball standout Tucker Schye has put his red-shirt year at the University of Montana behind him and is excited about playing for the Griz this season.

With his first game coming up on Friday at 2 p.m. against the University of Wyoming, Schye feels primed and ready to go.

"I'm feeling pretty good and I'm ready to play. I'm excited to play for the Griz," Schye told the PCN.

His 6'4" 220 pound frame makes him the perfect candidate to play Mike Linebacker in the football program's 4-3 system, though he thrived in Malta's 3-4 system a couple of years ago.

"It's a little bit of an adjustment but a lot of the fundamentals and stuff that was done in high school are things we work on everyday here," he said.

Because this is Schye's first year on the field, the team has put him on second team defense behind junior Jeremiah Kose, a talented player, who unfortunately has had injuries in the last two seasons, including a torn ACL early last season.

Schye will however play on special teams right away, giving him reps and giving him a chance to standout.

Schye also realizes that if called upon in any situation, he would be ready to start at this very moment.

If they called me up to start right now, I'd feel comfortable doing it," said Schye. "Next man up, I'm ready to go and whatever they need me to do I'd do it."

This should come as no surprise as Schye had been studying and waiting a long time to bring his talents onto the field.

This past summer Schye was invested so much into the team, that he decided to stay and train with the team.

"I stayed here in Missoula and we ran twice a week and lifted three times," Schye said.

He gave acknowledgement to the University's strength and conditioning coach, Mike Gerber, formerly of UNLV.

Gerber has had previous experience with the Griz, but Schye in his first year with Gerber, notices a difference.

"I've improved in everything because of him and it was a really good summer," Schye said. "With Coach Gerber there's just more explosive lifts, like power cleans and snatches."

Schye went on to say that under coach Gerber the cardio is more specific to football, meaning the team isn't just running miles and miles, but they are working on drills specific to the player's position.

"Linebackers do drops and short sprints to get us ready a play at a time," said Schye. "We're not just running to be running, it had a purpose."

In terms of strength, Schye knows that he is a lot stronger than he was his freshman year.

"My technique has gotten a lot better," Schye said. "Just getting older and being in a college football program, I definitely have gotten stronger and put on a little more weight."

As far as his diet goes, Schye doesn't need to regulate what he eats, he just makes sure that he is getting plenty of calories and protein, to keep his weight up during the season.

The Griz had a solid team last year, finishing 10-3, with a solid linebacker core, but Schye believes this year's defense can be just as good.

"It's easy for me to speak about our defense because I'm playing on it, but I think we will be just as good," said Schye. "Our D-line is the best in the nation there is no one better."

Rather than being one dimensional, like many linebackers are, Schye and the five other linebackers on the team are expected to drop into pass coverage as well as get into the backfield.

"That's the nature of being a linebacker, we're expected to be in on every play," said Schye. "We gotta defend the pass well and we gotta hit home when we're called to blitz and we gotta stop the run."

Being the Mike Linebacker, Schye has to communicate with his defense, luckily he has had some experience doing that as a Malta Mustang.

"You gotta call checks out during the game at pre-snaps," said Schye.

Schye's intention was always to go to play football for the Griz after seeing his childhood hero, former Mustang Lance Spencer join the University of Montana, years ago.

"I was always around the Mustangs football players since I was four, because my dad (Tad) was a coach," Schye. "I always looked up to Lance and ever since he came here, this is the place I wanted to be."

Now he will get the chance to take the field as a Grizzly, come Saturday.

If Schye can stay healthy and make plays like he did as a Mustang behind a solid program like the U of M, he will likely follow in the footsteps of Brock Coyle (drafted by the Seattle Seahawks) and Jordan Tripp (drafted by Miami Dolphins).

But for now Schye is focused only on his college career.

"That's a ways down the line and I have four years to go," Schye said. "Of course, I'd love to give it a shot if the opportunity comes up after I'm done playing college."

For many, it's hard to balance school and sports after high school, but Schye, who is a business major, found a good balance last year and hopes to improve.

"I think it went good last year, balancing school and football," he said. "It is a little bit tougher, because college is harder than high school."

Schye believes the balance will be even easier as he gains more collegiate experience.